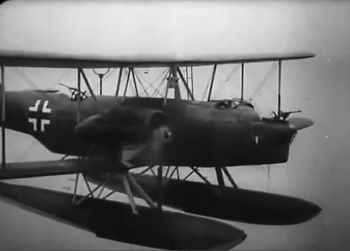 The Heinkel He 59 was a German biplane floatplane with two V12 engines used by the Luftwaffe during WW2 for torpedo bombing and reconnaissance. During the Battle of Britain, some were dedicated to SAR duties and painted full white with Red Crosses. Otherwise, they performed transport tasks and patrol late in the war, two of them under the Finnish colors (but they flew only four missions during the four month length lease). Last flights occured in 1944.

This page lists all films that feature a variation of the Heinkel He 59.

Pages in category "Heinkel He 59"