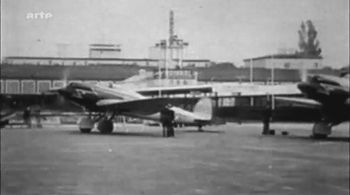 The Heinkel He 70 was a German low wing monoplane which made its maiden flight on 1 December 1932. Initial requirement was for a fast mailplane. A retractable undercarriage and several other refinements put the top speed at 377 km/h (224 mph) during trials for world records. So military use was considered as fast reconnaissance aircraft in Spain (with Condor Legion). Hungary used it too in this role (in 1941) but with less success due to progress in aviation. For those used by the Luftwaffe, they were quickly relegated to liaison duties before the war.

Around 350 of these aircrafts were built in Germany and under licence in Hungary.

This page lists all films that feature a variation of the Heinkel He 70.

Pages in category "Heinkel He 70"