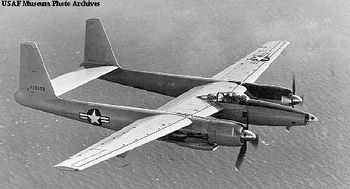 The Hughes XF-11 was a prototype military reconnaissance aircraft, designed and built by Hughes Aircraft. This twin engine, twin-boom all-metal monoplane with a pressurized central crew nacelle was wider the Lockheed P-38 Lightning with length and span nearly twice those of the F-4 & F-5 (photo-reconnaissance variant of the P-38). USAAF ordered one hundred airframes in 1943 but maiden flight occured only on 7 July 1946 with Howard Hughes himself at controls. The flight was highly publicised by its dramatical crash in the suburbs of Los Angeles (crushing three houses of Beverly Hills). An oil leak of the contra-rotating four-bladed system was to be blamed and so, the second prototype had regular single four-bladed propellers. But the order had been already canceled on 29 May 1945, following objections of the USAAF Materiel Command, which held that Hughes did not have the industrial capacity and despite personnal backing of several highest generals. The flight testing of the second prototype revealed the XF-11 was harder to fly and maintain than the other competitor, the Republic XF-12 Rainbow (Forgotten Aircraft: The Republic XF-12 Rainbow). Eventually, USAF ordered and used the Northrop F-15 Reporter and the Boeing RB-50 Superfortress.

This page lists all films that feature a variation of the Hughes XF-11.