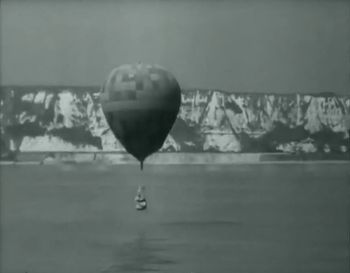 Jean-Pierre Blanchard's hydrogen balloon in The Conquest of the Air.

In 1783, as the Montgolfier brothers are developing the hot air balloon, JP Blanchard uses the hydrogen ("Dihydrogène" as said at that time) as gas to inflate and rise up its own balloon. After his first successful balloon flight in Paris on 2 March 1784, he made the first successful manned balloon flight on 21 November 1783. He then went in the summer of 1784 to England where he made three flights, the third one (with Jeffries) was the first flight over the English Channel, taking about 2½ hours to travel from England to France on 7 January 1785.

Hydrogen balloons are easily identified (from those using hot air) by the narrow chimney on their base.

This page lists all films that feature the Jean-Pierre Blanchard's hydrogen balloon.