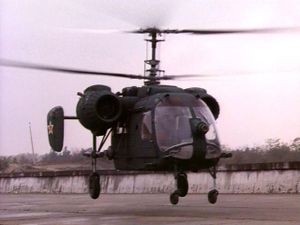 The Kamov Ka-26 (NATO reporting name 'Hoodlum') is a distinctive light utility helicopter produced by the Soviet helicopter maker Kamov between 1966 and 1978 with over 850 being produced in that time. The Hoodlum has a distinctive design with coaxial rotors typical of Kamov helicopters, and a removable multipurpose box mounted behind a fixed bubble shaped cockpit. This removable box could be applied to numerous purposes such as passenger carrying, medevac and crop dusting giving the Ka-26 a great deal of versatility. The two engines are mounted in off board gondolas further adding to the unusual appearance.

This page lists all films that feature a variation of the Kamov Ka-26.