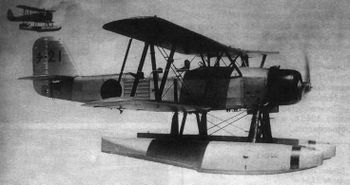 The Kawanishi E7K was an Imperial Japanese Navy floatplane dedicated to reconnaissance tasks. This three-seat biplane airframe produced by the Kawanishi Aircraft Company was used during World War II. The Allied reporting name for the type was Alf; the Japanese Navy designation was "Type 94 Reconnaissance Seaplane". Two variants went out the production line : the E7K1 powered by a water-cooled W-12 engine was on duty from 1938 until the beginning of the Pacific War. In 1943, the E7K2 (easily identify by its radial engine) took over the task when the E7K1 was relegated to second-line duties.
Both variants have had one third of their airframes used by civil Nippon Hikoki K.K. airline.

A grand total of 533 Kawanishi E7K were built.

This page lists all films that feature the Kawanishi E7K.