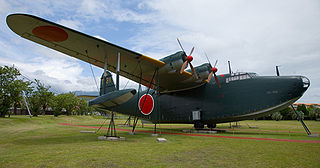 The Kawanishi H8K was an Imperial Japanese Navy flying boat produced by the Kawanishi Aircraft Company and used during World War II for maritime patrol duties. The Allied reporting name for the type was Emily; the Navy designation was "Type 2 Large-sized Flying Boat". H8Ks were deployed in service from 1942 until the end of the war. Its heavy defensive armament make it considered by respect by allied pilots but most of them were eventually shoot down or destroyed on the ground.

This page lists all films that feature the Kawanishi H8K.