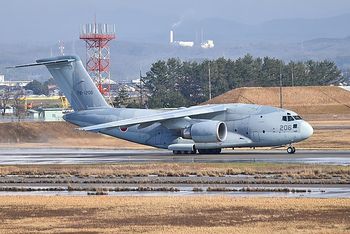 The Kawasaki C-2 (previously XC-2 and C-X) is a mid-size, twin-turbofan engine, long range, high speed military transport aircraft developed and manufactured by Kawasaki Aerospace Company. In June 2016, the C-2 formally entered service with the Japan Air Self-Defense Force (JASDF). There are ongoing efforts to sell it overseas to countries such as New Zealand and the United Arab Emirates. The aircraft is to supplant and replace the older Kawasaki C-1 turbofan transport that has been in service since the 1970s.

This page contains all films, TV series, and video games that feature the Kawasaki C-2.