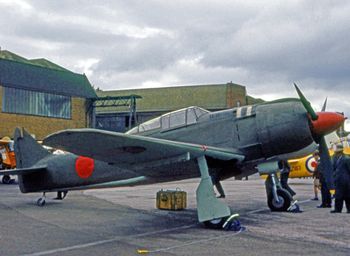 The Kawasaki Ki-100 was a fighter aircraft used by the Imperial Japanese Army Air Service in World War II. The Japanese Army designation was "Type 5 Fighter" (五式戦闘機: Go-shiki sentouki or abbreviated as Goshikisen). No new Allied code name was assigned to this type; 275 Ki-100 airframes were built as Ki-61s before being modified to accept a Mitsubishi Ha-112-II radial engine in place of the original Kawasaki Ha-40 inline engine.

This page contains all films, TV series, and video games that feature the Kawasaki Ki-100.