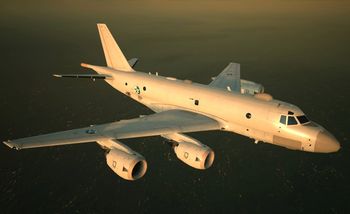 The Kawasaki P-1 (previously P-X, XP-1) is a Japanese maritime patrol aircraft developed and manufactured by Kawasaki Aerospace Company. Unlike many maritime patrol aircraft, which are typically conversions of civilian designs, the P-1 is a purpose-built maritime aircraft with no civil counterpart and was designed from the onset for the role. It has the distinction of being the first operational aircraft in the world to make use of a fly-by-optics control system.

The P-1 has entered service with the Japan Maritime Self-Defense Force (JMSDF) as a replacement for the P-3C Orion. On 26 March 2013, the JMSDF took delivery of the first two operational P-1 aircraft. Export customers are also being sought for the type as part of a general loosening of Japanese military export restrictions.

This page contains all films, TV series, and video games that feature the Kawasaki P-1.