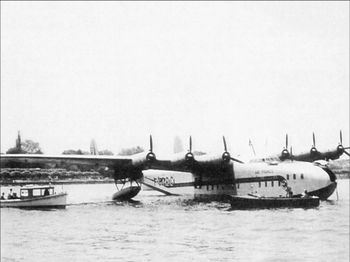 The Latécoère 631 was the last aircraft design of this company founded in 1917. The prototype of this six radial engined transatlantic flying boat meant for 40 passengers was ordered in 1938 but the outbreak of WW2 stopped the last step of the assembly. Work resumed slowly under German rule and the maiden flight was done the day Allies landed on North Afrika. So Hitler invaded South of France and the airframe was quickly sized and flown to Lake Constance where she was sunk by an Allied air raid on April 1944. Before VE Day, the second prototype made its first flight and soon four airliners were on Air France fleet. Thirteen months later, the type was withdrawn following the total loss of the 6th airframe. This is one of such four dramas occuring among a serie of only ten airliners built. The last one (September 1955) led to the grounding and scrapping of the remaining fleet. Despite these events, the type was successful one year long on the longest commercial route even if uneconomic.

This page contains all films, TV series, and video games that feature the Latécoère 631.