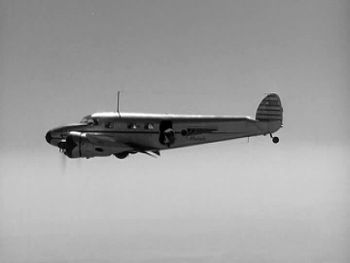 Lockheed L-12A Electra Junior seen in State of the Union.

The Lockheed Model 12 Electra Junior, more commonly known as the Lockheed 12 or L-12, is an eight-seat, six-passenger all-metal twin-engine transport aircraft of the late 1930s designed for use by small airlines, companies, and wealthy private individuals. A scaled-down version of the Lockheed Model 10 Electra, the Lockheed 12 was not popular as an airliner but was widely used as a corporate and government transport. Several were also used for testing new aviation technologies and military uses as C-40.

This page lists all films that feature a variation of the Lockheed Model 12 Electra Junior.