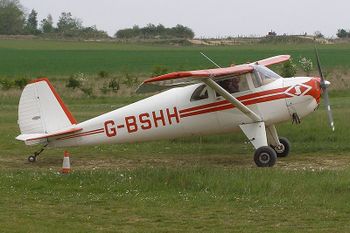 The Luscombe 8 is a series of high wing, side-by-side seating, conventional geared monoplanes designed in 1937 and built by Luscombe Aircraft. The Model 8 followed in the Luscombe tradition of using no wood in the construction, and had a monocoque fuselage with fabric-covered metal wings. For a cheap, light aircraft, this was a revolutionary construction technique . Its competitors were built of fabric-covered steel tubing, with wooden spars and sometimes ribs in the fabric-covered wings. Luscombe's construction techniques allowed him to build his aircraft quickly and cheaply, without sacrificing strength. His aircraft were also more efficient than his competitors, cruising 10-20 mph faster on the same power . More than 5000 aircraft have been produced.

This page lists all films that feature the Luscombe 8.