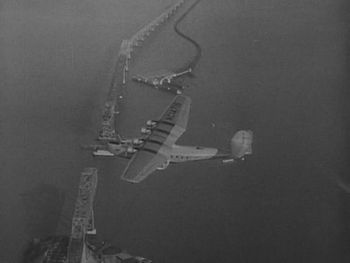 The Martin M-130 was a commercial flying boat designed and built in 1935 by the Glenn L. Martin Company in Baltimore, Maryland, for Pan American Airways. Only three M-130s were built: the China Clipper, the Philippine Clipper and the Hawaii Clipper. A fourth flying boat (designated as M-156) called the Russian Clipper was built for the Soviet Union which was essentially identical to the three Pan Am models except that it had a larger wing (giving it a longer range) and twin vertical stabilizers. Martin designated them as the Martin Ocean Transports, but to the public they were all referred to as the China Clipper, a name which evolved into a generic term for Pan Am's entire fleet of large flying boats - the Martin M-130, Sikorsky S-42, and Boeing 314.

This page lists all films that feature the Martin M-130.