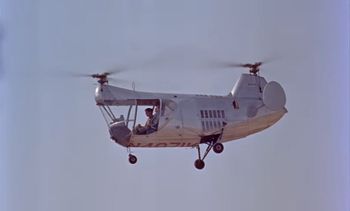 Robert Paxton McCulloch (May 11, 1911 – February 25, 1977) graduated from Stanford University and with the help of his grandfather's fortune (inherited in 1925) built up a first company during the 1930's. Once this one sold, he started McCulloch Aviation quickly changed into McCulloch Motors Corporation as the company activity focused too on small motors, chainshaw, etc ... The aviation subsidary was still in existence and acquired Helicopter Engineering Research Corp (HERC) and subsequently developped the HERC JOV-3, a two-seat tandem helicopter originally designed by Drago Jovanovich. Further design gave an enlarged variant named McCulloch MC-4 or YH-30 (three airframes for the United States Army) or XHUM-1 (two MC-4As for evaluation by the United States Navy). Underpowered, the type didn't reach the mass production.

This page lists all films that feature the McCulloch MC-4 or any variant.