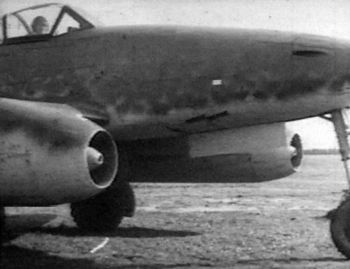 Messerschmitt Me 262 A-1a Swalbe seen in The Story of Aviation .

The Messerschmitt Me 262 Schwalbe ("Swallow") was the world's first operational jet-powered fighter aircraft. Design work started before World War II began, but engine problems prevented the aircraft from attaining operational status with the Luftwaffe until mid-1944. Compared with Allied fighters of its day, including the jet-powered Gloster Meteor, it was much faster and better armed. In combat, when properly flown, it proved difficult to counter due to its speed. Me 262 pilots claimed a total of 542 Allied kills against the loss of about 100 Me 262s. The design was pressed into a variety of roles, including light bomber, reconnaissance and even experimental night fighter versions.The Me 262 influenced the designs of post-war aircraft such as the North American F-86 Sabre and Boeing B-47 Stratojet. About 1400 aircrafts built.

This page lists all films that feature the Messerschmitt Me 262.

Pages in category "Messerschmitt Me 262"