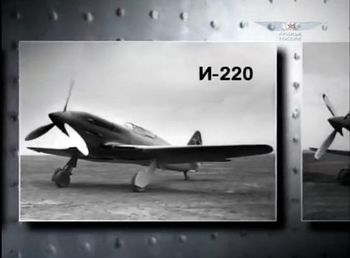 Mikoyan-Gurevich I-220 seen in Wings of Russia.

The Mikoyan-Gurevich I-220 was a Soviet prototype intended to the high altitude to intercept German long range reconnaissance aircraft. Despite usually linked to the Mig 3, it was an new design based on the AM-38F engine. In need of more power, the AM-39 replaced eventually the first engine but its lack of fiability ampered further production.

This page lists all films that feature the Mikoyan-Gurevich I-220.

Pages in category "Mikoyan-Gurevich I-220"