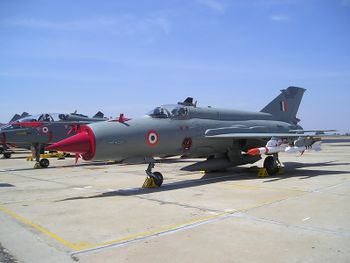 The Mikoyan-Gurevich MiG-21 is a supersonic jet fighter aircraft that first flew in 1955 and was produced until 1985. At least 50 countries have operated the MiG-21 with smaller numbers still in operation. Over 11,000 aircraft were produced, and as such it is the most produced supersonic jet aircraft in history. The MiG-21 was given the NATO reporting name of 'Fishbed'.

This page lists all films that feature a variation of the Mikoyan-Gurevich MiG-21.