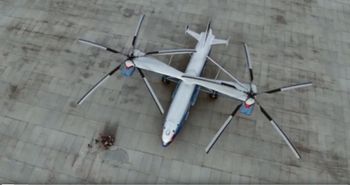 This page lists all films that feature a variation of the Mil V-12 ("Homer" according NATO).