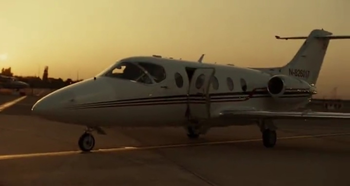 The Mitsubishi MU-300 Diamond is a small, low-winged twin-turbofan aircraft of all metal construction, flown by a crew of two pilots and accommodating eight passengers. The aircraft first flew on 29 August 1978. In May 1986, Beechcraft bought the production rights and built an upgraded variant, the Beechjet 400. A version for the United States Air Force known as the T-1A Jayhawk was built between 1992 and 1997 and reach 180 airframes. Mergers in the industry have led the group to be renamed Raytheon then Raytheon Hawker and eventually the assembly line produces the Hawker 400.