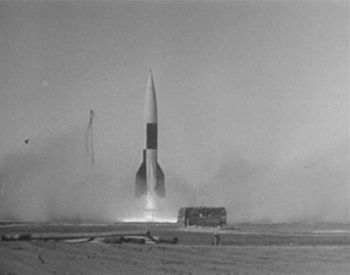 The Mittlewerk EWM Vergeltungswaffe V-2 was a ballistic missile that was developed at the beginning of the Second World War in Germany, specifically targeted at London and later Antwerp. The liquid-propellant rocket was the world's first long-range combat-ballistic missile and first known non-human-piloted artifact to achieve sub-orbital spaceflight. It was the progenitor of all modern rockets, including those used by the United States and Soviet Union's space programs. During the aftermath of World War II the American, Soviet and British governments all gained access to the V-2's technical designs and the actual German scientists responsible for creating the rockets, via Operation Paperclip, Operation Osoaviakhim and Operation Backfire. The weapon was presented by Nazi propaganda as a retaliation for the bombers that attacked ever more German cities from 1942 until the end of the war. Over 3,000 V-2s were launched as military rockets by the German Wehrmacht against Allied targets during the war, mostly London and later Antwerp. The attacks resulted in the death of an estimated 7,250 military personnel and civilians, while 12,000 forced labourers were killed producing the weapons.

This page lists all films that feature a variation of the Mittlewerk EWM Vergeltungswaffe V-2.