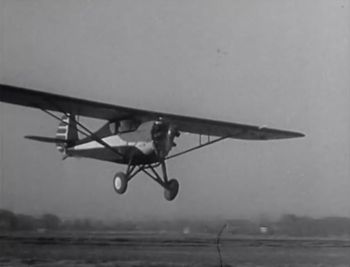 Monocoupe 90 seen in Mariners of the Sky.

The Monocoupe 90 was an American general aviation aircraft designed in 1928 by Don A. Luscombe. The company had a complex background and eventually Luscombe left to form his own company in 1933 but the Monocoupe had continous upgrade which kept this braced high-wing monoplane side-by-side two-seat lightplane very affordable. Despite various powerplant from 60 hp to 145 hp through years, wheel fairings and engine cowling on some variant, the type is easily identified by the reverse curve rear fuselage line. Production stopped in 1940 to resume briefly after World War Two ... and even during the 1990's.

This page lists all films that feature a variation of the more three hundred Monocoupe 90 and variant built.