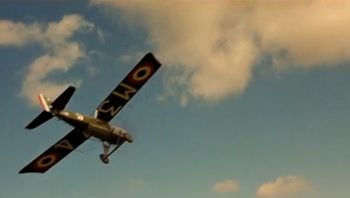 The Morane-Saulnier MS.138 was a military trainer aircraft produced in France in the late 1920s, the major production version of a family that also included the MS.137 and MS.139. The design was derived from the MS.35, first flown during World War I, modernised to feature a wing that now included slight sweepback, and a redesigned fuselage of rounder cross-section. The basic layout remained the same, being a wire-braced, parasol-wing monoplane with open cockpits in tandem and fixed tailskid undercarriage. Construction was mostly of wood, with the exception of the metal wing spars, and all control surfaces were covered in fabric. Most of the production run went to the Aéronautique Militaire, with a few others built for the Aéronavale and for military use by Greece and Denmark. Thirty-three others were purchased by civilian operators in France. The type remained in French military service until 1935.

This page lists all films that feature the Morane-Saulnier MS.138.