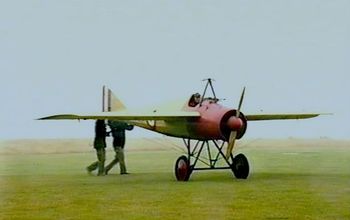 The Morane-Saulnier N, also known as the Morane-Saulnier Type N, was a French monoplane fighter aircraft of the First World War. Designed and manufactured by Morane-Saulnier, the Type N entered service in April 1915 with the Aéronautique Militaire designated as the MS.5C.1. It also equipped four squadrons of the Royal Flying Corps, in which it was designated the Bullet and was operated by Imperial Russian Air Force and Royal Flyinh Corps.

This page lists all films that feature the Morane-Saulnier N.