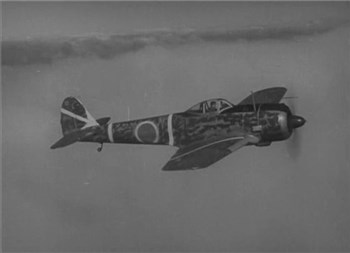 The Nakajima Ki-43 Hayabusa (Allied reporting name Oscar) was a Japanese single engined fighter produced during World War II for the Imperial Japanese Army Air Force. Its first flight occurred in the early days of 1939. Its lack of armor and self-sealing tanks gave it incredible handling which made it a hard target for allied pilots. But once in the gunsight, it was a brittle aircraft, and easy to ignite. Despite a light armament, many Japanese aces scored most of their victories at its controls, the Ki-43 shot down more Allied aircraft than any other Japanese fighter. During the last months of the Pacific War, several were used for Kamikaze missions. After Japan surrendered, a handful of airframes saw limited action with France (Indochina), Korea, Indonesia and China (which wrote off the very last Ki-43 in 1952).

This page lists all films that feature the Nakajima Ki-43.