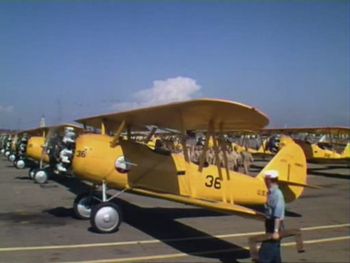 The N3N was a United States two tandem-seat, open cockpit, primary training biplane aircraft built by the Naval Aircraft Factory (N.A.F.) in Philadelphia, Pennsylvania during the 1930s. Built to replace the Consolidated NY-2 and NY-3, the N3N was successfully tested as both a conventional airplane and a seaplane. The seaplane used a single float under the fuselage and floats under the outer tips of the lower wing. The conventional airplane used a fixed landing gear. The N.A.F. delivered 997 N3N aircraft beginning in 1935. They included 180 N3N-1s and 816 N3N-3s. Four N3N-3s were delivered to the United States Coast Guard in 1941. Production ended in January 1942 but the type remained in use through the rest of World War II. The N3N was the last biplane in US military service - the last (used by the U.S. Naval Academy for aviation familiarization) were retired in 1961. The N3N was also unique in that it was an aircraft designed and manufactured by an aviation firm wholly owned and operated by the U.S. government (the Navy, in this case) as opposed to private industry. For this, the Navy bought the rights and the tooling for the Wright R-760 series engine and produced their own engines. These Navy built engines were installed on Navy built airframes. A Navy N3N was used as a crop sprayer in Alfred Hitchcock's film North by Northwest though after impact with the fuel tanker the wreckage is seen to be a Boeing Stearman.

This page lists all films that feature the Naval Aircraft Factory N3N Canary.