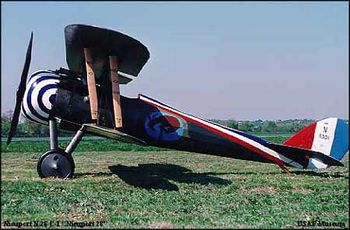 The Nieuport 28 (N.28C-1) was a French biplane fighter aircraft flown during World War I, built by Nieuport and designed by Gustave Delage. Owing its lineage to the successful line of sesquiplane fighters that included the Nieuport 17, the Nieuport 28 continued a similar design philosophy of a lightweight and highly maneuverable aircraft. It equipped four American squadrons between March and August 1918. It thus became the first aircraft to see operational service with an American fighter squadron. Nieuport 28s saw considerable post-war service: in particular 50 "returned" to America, and as well as army and naval service these found civilian use, especially in Hollywood films.

This page lists all films that feature the Nieuport 28.