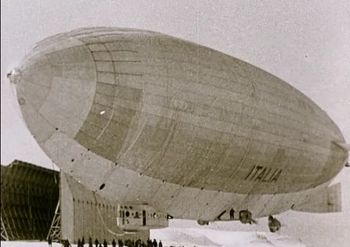 The Nobile N-class Airships were semi-rigid Italian-built airships of the 1920's. With a length of roughly 106 meters for a diameter between 20 and 26 meters, the N-class was powered by three Maybach engines. The most well-known ones are the N-1 Norge and the N-4 Italia which flew polar flights. The N-3 was sold to Japan and during the mid 1930's, Umberto Nobile went to Soviet Union where he designed another semi-rigid airship similar to the N-class, the SSSR-V6 OSOAVIAKhIM (Russian: СССР-В6 ОСОАВИАХИМ).

This page lists all films that feature a variation of the Nobile N-class Airship.