Not to be confused with the earlier FJ-1 variant. 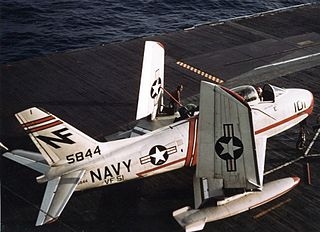 Despite a shape similar to the North American F-86, the North American FJ Fury is a new design able to be operated from carrier vessels. It featured folding wings, and a longer nose landing strut (higher angle of attack to easy the short take-off run; reinforced landing gear to resist to the landings on carrier vessel). It was active from 1955 to 1962. FJ-2 were powered by a General Electric J47-GE-2 whilst the FJ-3 has was a version powered by the Wright J65. FJ-4 was a FJ-3 with a new wing profile.
Please note that the 31 North American FJ-1 Fury with their straight wing are not included in this category.

This page lists all films that feature a variation of the North American FJ-2/3/4 Fury.