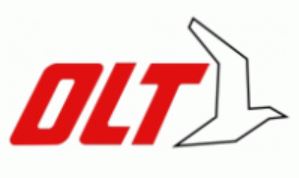 In 1972 the airline Ostfriesische Lufttaxi GmbH was renamed again, now into Ostfriesische Lufttransport GmbH (OLT) and Kaltenborn-Stachau took over 26%. Several new schedule services were introduced like from Kassel, Düsseldorf to Cologne/Bonn in 1973 and Hanover, Saarbrücken, Stuttgart, Münster/Osnabrück and Frankfurt in 1974. For the regional airlines business strategy the company DLT (Deutsche Lufttransport-Gesellschaft mbH) was created and OLT was renamed into DLT Luftverkehrsgesellschaft. But soon later AGIV decided to split the Emden (OLT) operation away from DLT. This unit (Emden operation) was sold then to AG EMS and OLT restart its old core activities under its own name.

At the beginning 1990s, with the fall of the Berlin Wall, the airlines faced an increase of their business activities. OLT started operations in the former East German provinces and 1990 took over Roland Air from Bremen. In 1991 OLT set up a base in Bremen and started with its scheduled services there. In 1996 all OFD activities were integrated into OLT and therefore under the control of AG EMS.
OLT is one of very few airlines that has succeeded in driving a low-cost rival off a route.In August 2011, OLT was bought by a Polish shadow banking Ponzi scheme company Amber Gold, and will be renamed OLT Express Germany.