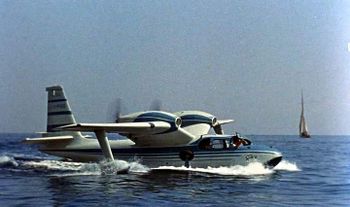 The Piaggio P.136 was an Italian twin-engine amphibian flying-boat, with an all-metal hull, pusher propellers, a gull wing, and retractable landing gear.The prototype first flew in late 1948, and completed certification tests in spring 1949. The Italian air force contracted 14 P.136s for coastal patrol and air-sea rescue. The aircraft was marketed in the United States as the Royal Gull, by Kearney and Trecker. Trecker received three aircraft, and components for another 29, but they also built a few on their own, under license.

This page lists all films that feature the Piaggio P.136.