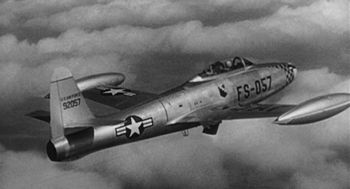 Republic F-84G Thunderjet seen in Earth vs. the Flying Saucers .

The Republic F-84 Thunderjet was an American turbojet fighter-bomber aircraft. Originating as a 1944 United States Army Air Forces (USAAF) proposal for a "day fighter", the F-84 flew in 1946. Although it entered service in 1947, the Thunderjet was plagued by so many structural and engine problems that a 1948 Air Force review declared it unable to execute any aspect of its intended mission and considered cancelling the program. The aircraft was not considered fully operational until the 1949 F-84D model and the design matured only with the definitive F-84G introduced in 1951. In 1954, the straight-wing Thunderjet was joined by the swept-wing F-84F Thunderstreak fighter and RF-84F Thunderflash photo reconnaissance aircraft. The F-84 Thunderjet was operated by several nations in western Europe, Middle-East and Asia.

This page lists all films that feature a variation of the Republic F-84 Thunderjet (except the F-84F Thunderstreak).