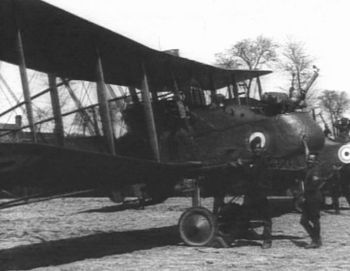 Royal Aircraft Factory F.E.2b seen in The Story of Aviation .

The Royal Aircraft Factory F.E.2 was a two-seat pusher biplane that was operated as a day and night bomber and as a fighter aircraft by the Royal Flying Corps during the First World War. Along with the single-seat D.H.2 pusher biplane and the Nieuport 11, the F.E.2 was instrumental in ending the Fokker Scourge that had seen the German Air Service establish a measure of air superiority on the Western Front from the late summer of 1915 to the following spring. The F.E.2 (Farman Experimental 2) designation refers to three distinct designs, all pushers based on the general layout employed by the French aircraft designers, the Farman Brothers. About 1900 aircrafts were produced and used by the Royal Flying Corps, Australian Flying Corps and the American Expeditionary Forces.

This page lists all films that feature the Royal Aircraft Factory F.E.2 .