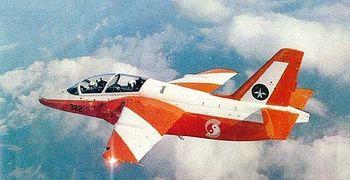 The SIAI Marchetti S.211 (aka Aermacchi S-211) was designed during the second half of the seventies. The maiden flight of this military trainer aircraft powered by a single turbofan occured in 1981. The production reached an end in 1994 after 60 airframes built for the Philippine Air Force (25 aircrafts), Haitian Air Force (4 airframes) and the launch customer the Republic of Singapore Air Force (RSAF) which bought 32 planes. Most are now decomissioned and owned privately mainly in the USA and Australia.

This page lists all films that feature the SIAI Marchetti S-211.