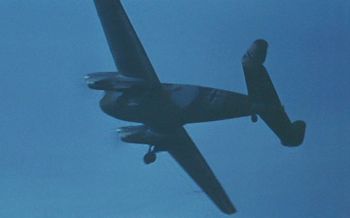 The SNCAC Martinet was a french derivative of the german Siebel Si-204 re-engined with two Renault 12S, themselves a french after war production of the german Argus As 411. After the single NC 700 prototype, the NC 701 went into production as a trainer for both radio and pilot army student. With its glazed nose, its share its lines with the Siebel 204D when its follower, the NC 702 has a solid pointed nose and was dedicated to eight passengers.
The both type are seen in Triple Cross.

350 airframes of the both types were built.

This page lists all films that feature a variation of the SNCAC Martinet.