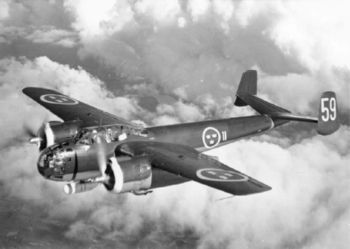 The SAAB 18 was a twin-engine bomber and reconnaissance aircraft, designed and built for use by the Swedish Air Force by Svenska Aeroplan AB (SAAB) in response to a 1938 design competition. Due to delays, it did not enter service until 1944, but quickly became the standard Swedish bomber aircraft. Serving in the bomber, reconnaissance and ground-attack roles, it also assisted in the development of ejection seats and air-to-surface guided missiles until its replacement by the Saab Lansen in the late 1950s.

This page contains all films, TV series, and video games that feature the Saab 18.