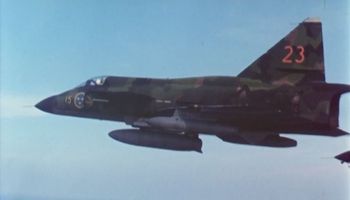 The Saab 37 Viggen was a Swedish single-seat, single-engine, short-medium range fighter. Built from 1970, the last airframe was roll-out in 1990. During these twenty years, five main variants were put into service and several upgrades were done allowing the type to be in service until end of 2005.

This page lists all films that feature a variation of the Saab 37 Viggen.