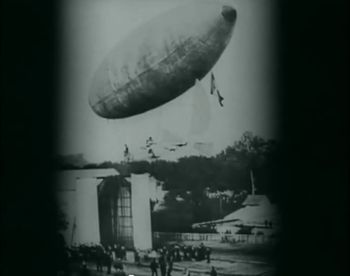 Santos Dumont n° 6 seen in The Conquest of the Air.

In April 1900, Henri Deutsch de la Meurthe offered a prize of 50,000 francs to the first machine capable of flying a round trip from the Parc de Saint Cloud to the Eiffel Tower in Paris and back in less than thirty minutes. After several attempts, on 19 October 1901, Santos-Dumont launched a new lighter-than-air, his Number 6 airship at 2:30 pm. After only nine minutes of flight, Santos-Dumont had rounded the Eiffel Tower. Despite engine problems on the return flight, he was able to cross the line seconds just before the time limit.

This page lists all films that feature airship Number 6 (and number 5 slighty smaller and lost during a former attempt).

Pages in category "Santos Dumont No 6"