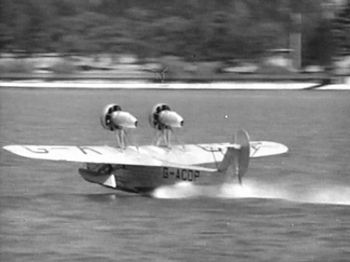 Saunders-Roe A17 Cutty Sark seen in Watch and Ward in the Air .

The Saunders-Roe A17 Cutty Sark was a British amphibious aircraft from the period between World War I and World War II, built by the British firm Saunders-Roe (also known as SARO). The aircraft was named after the ship Cutty Sark. The A17 Cutty Sark was the new company's first design. It was a shoulder-winged twin-engined four-seat amphibian monoplane with an all-metal hull and plywood covered wings. The above-wing pylon-mounted engines could easily be changed, and a variety of different engines were used to power Cutty Sarks, including 104 hp Cirrus Hermes Mk 1s and 120 hp de Havilland Gipsy IIs. The Saunders-Roe A19 Cloud was developed from this design. Only 12 Cutty Sarks were built, and none lasted long in service, but the type nevertheless saw service with many users in the United Kingdom, Australia, Canada, New Zealand, China, Japan and the Dominican Republic.

This page lists all films that feature the Saunders-Roe A17 Cutty Sark.