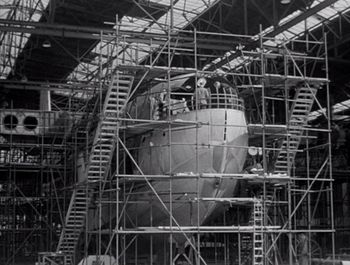 Manufacturing a Saunders-Roe SR.45 Princess as seen in Family Portrait.

The Princess was the largest all-metal flying boat ever constructed (*) but the project was delayed by difficulties with the Bristol Proteus engines. This led to two Princesses were built but never flew (G-ALUO and G-ALUP) whilst the prototype, G-ALUN, first flew on 22 August 1952 and made 46 test flights in total for about 100 hours flying time including displaying at the Farnborough Air Show in September 1953. The three airframes were stored against possible purchase but when an offer was made it was found that corrosion had set in; as a result they were scrapped.

(*) the Hughes H-4 Spruce Goose was wider but built in spruce not metal.

This page lists all films that feature a variation of the Saunders-Roe SR.45 Princess.