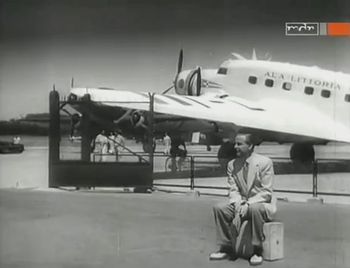 The Savoia-Marchetti SM.75 was an Italian passenger and military transport aircraft of the 1930s and 1940s. It was a low-wing, trimotor monoplane of mixed metal and wood construction with a retractable tailwheel undercarriage. It was the last of a line of transport aeroplanes that Alessandro Marchetti began building in the early 1930s. The SM.75 was fast, robust, capable of long-range flight and could carry up to 24 passengers for 1,000 miles.

This page contains all films, TV series, and video games that feature the Savoia Marchetti SM.75.