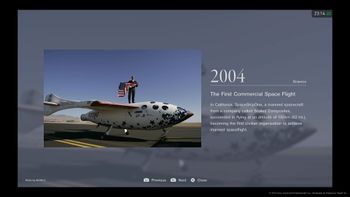 SpaceShipOne is an experimental air-launched rocket-powered aircraft with sub-orbital spaceflight capability at speeds of up to 900 m/s (3,000 ft/s), using a hybrid rocket motor. The design features a unique "feathering" atmospheric reentry system where the rear half of the wing and the twin tail booms folds 70 degrees upward along a hinge running the length of the wing; increasing drag while remaining stable. SpaceShipOne completed the first crewed private spaceflight in 2004. That same year, it won the US$10 million Ansari X Prize and was immediately retired from active service. Its mother ship was named "White Knight". Both craft were developed and flown by Mojave Aerospace Ventures, which was a joint venture between Paul Allen and Scaled Composites, Burt Rutan's aviation company. Allen provided the funding of approximately US$25 million. SpaceShipOne's official model designation is Scaled Composites Model 316.

This page contains all films, TV series, and video games that feature the Scaled Composites SpaceShipOne.