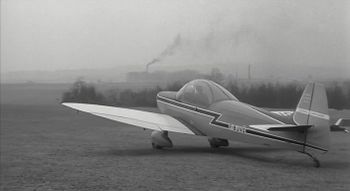 Claude Piel (1921-1982) was a notable French aircraft designer but his designs were built by several compagnies. Despite technical great success for most of them, the Scintex Aviation company did not encountered enough success and stopped its aeronautical activities in 1964 just when the CP 1310 Super Emeraude emerged. The company first sub-contracted to CAARP (Cooperatives des Ateliers Aéronautiques de la Region Parisienne) the building of the CP 1310 Super Emeraude type. Eventually, CAARP acquired the license and produced the type and others Claude Piel designs. But in 1965 CAARP was set up by Mudry.

The CP 1310 Super Emeraude is a low-wing cantilever monoplane with a fixed tailwheel undercarriage and side-by-side seating for two. Powered by a Continental O-200, its derivatives used a Potez 4E or a Lycoming O-235 (types 1315 and 1330). Intended for aerobatics.

Of the original CP 1310, 23 were built and two tenths of the derivatives.

A link about Claude Piel, including an overview of his design : Claude Piel and his aircraft on Wikipedia