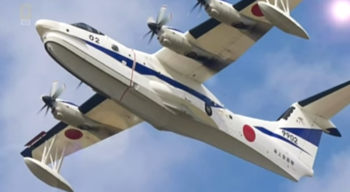 In 1949, from the ashes of Kawanishi Aircraft Company was founded the Shin Meiwa Industries (which was rebranded as ShinMaywa in 1992). This company had a committee which was tasked with developing seaplane designs. His ambitious aim of producing an aircraft that could land upon rough seas and encounter little impact from waves and spray is uncommon for most seaplane programms actually. By 1959, the committee felt that it had developed an appropriate design to meet its specification. Two years later, the company was lobbying the Japanese Defense Agency to consider the adoption of a four engined flying boat to meet the nation's requirement for a anti-submarine warfare (ASW) patrol aircraft at a time the Soviet submarine fleet was in a quick and wide expansion.
The UF-XS was a converted Grumman HU-16 Albatross testbed aircraft which led to the two PS-X demonstrators. In 1969, the JMSDF placed the first order for an eventual fleet of 21 ASW aircraft, designated PS-1; orders for the SAR variant, designated US-1A, were also issued during the 1970s. This last type has no underwing pod nor searchlight and had been replaced by the ShinMaywa US-2, a modernised variant powered by Rolls-Royce engines driving six blades propeller. For the ASW, the task is now dedicated to the land based Lockheed P-3 Orion.

This page lists all films that feature an amphibian of Shin Meiwa (or since 1992 : ShinMaywa).