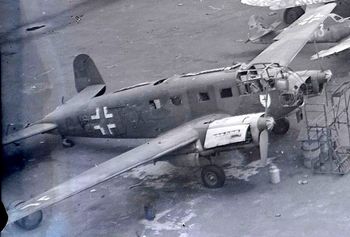 The Siebel Si 204 is a medium transport with a twin tail which made its maiden flight in 1940, used by the Luftwaffe for liaison duties or blind flying training. Manned by a crew of two, it could accomodated up to eight passengers.
After 1945, France and Czechoslovakia (Aero Vodochody) built it (respectively 240 and 180 airframes) mainly for their own air forces :