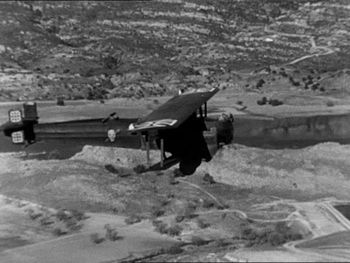 The Sikorsky S-29A was an all-metal, twin-engine biplane airliner for 15 passengers, first flown in 1924. Only one airframe was built as no company ordered it. It flew with success during five years in a variety of tasks. In 1930, Howard Hughes bought it and after heavy convertion work, used it as a german bomber. Damaged beyond repair during movie action, the shots were used again in at least five other movies during the thirties.

This page lists all films that feature the Sikorsky S-29A.