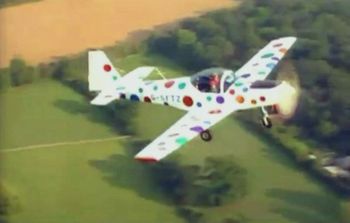 Slingsby T67M Firefly in Come Outside.

The Slingsby T67 Firefly, originally produced as the Fournier RF-6, is a two-seat aerobatic training aircraft, built by Slingsby Aviation in Kirkbymoorside, Yorkshire, England. The RF-6 was designed by René Fournier and first flew on 12 March 1974. An all-wooden construction, it featured a high aspect-ratio wing echoing his earlier motorglider designs. Fournier set up his own factory at Nitray to manufacture the design, but after only around 40 had been built, the exercise proved financially unviable, and he was forced to close down production. A four-seat version was under development by Sportavia as the RF-6C, but this demonstrated serious stability problems that eventually led to an almost complete redesign as the Sportavia RS-180. In 1981, Fournier sold the development rights of the RF-6B to Slingsby who renamed it the T67. The earliest examples, the T67A, were virtually identical to the Fournier-built aircraft, but the design was soon revised to replace the wooden structure with one of composite material.

This page lists all films that feature the Slingsby T67 Firefly.