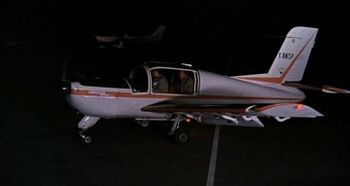 Socata MS.893 Rallye 180 seen in The Night of the Following Day.

The Socata Rallye was a single engine light aircraft, originally designed in the late 50’s by Morane-Saulnier as the MS.880 Rallye Club,in response to a French government competition. Morane-Saulnier became part of Sud Aviation in 1965, and was renamed Socata in 1966, continuing to build the Rallye in large numbers through the remainder of the 1960s and well into the 1970s, as an Aérospatiale subsidiary. In 1979, Socata renamed the Rallye series, with each model getting an individual, "more Gallic" name. They were gradually replaced in French production by the Socata TB series, the last (of approximately 3,300) aircraft built by Socata, an armed R235 Guerrier, being delivered in December 1984. Socata had sold a license for production of the Rallye 100ST to the Polish State aviation company PZL, the aircraft being produced in its Warsaw factory as the PZL Koliber.

This page lists all films that feature a variation of the Socata Rallye.