From The Internet Movie Plane Database
Revision as of 13:20, 10 May 2020 by LVCDC (talk | contribs) (Created page with "Soko NJ-22 Orao seen in [[Daleko Nebo.]] Fruit of a collaboration by SOKO in Yugoslavia and by Avioane Craiova in Romania, th...")
(diff) ← Older revision | Latest revision (diff) | Newer revision → (diff)
Jump to: navigation, search 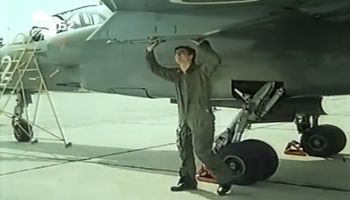 Fruit of a collaboration by SOKO in Yugoslavia and by Avioane Craiova in Romania, this twin-engined airframe was built by Soko as J-22 Orao in Mostar (113 aircrafts delivered -and several dozens orders cancelled due to the 1992 Yugoslavia breakup and destruction of the factory-) and as IAR-93 Vultur by Avioane Craiova (88 built). They are the ame aircraft but for a straight equality, each state built its own aircraft and christened them with a different name. this conventional twin-engine monoplane, featuring a high-mounted wing complete with all-swept flight surfaces was only subsonic as the United Kingdom didn't allow the variant with afterburner of the licenced engine : Turbomecanica/Orao-built Rolls-Royce Viper Mk 633. The single-seat was able to perform close air support (CAS), ground-attack and tactical reconnaissance missions and the two-seat main task was the advanced flight and weapons training. The type was phased out in 1998 in Romania. The events in Yugoslavia saw the type used at combat and subsequently on strength with several states of the former Federation. In 2019, the Serbian Air Force and Air Defence command is operating the very last aircraft (a dozen).

This page lists all films that feature a variation of the Soko J-22 Orao or the Avioane Craiova IAR-93 Vultur .