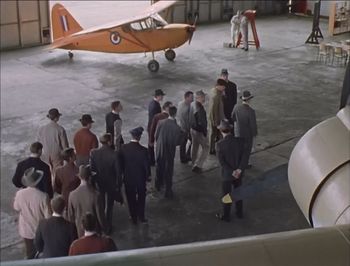 Stinson L-9 Voyager in Above and Beyond.

The Stinson Voyager was a 1940s American light utility monoplane built by the Stinson Aircraft Company. First developed as the Stinson Model 105 in 1939 it was a high-wing three-seat braced monoplane powered by either a 75 hp Continental A-75 or a 80 hp Continental A-80-6. This was developed into the Model 10 powered by a Continental A-80 piston engine. The Model 10 introduced a wider cabin as well as improved standards of interior and finish. The Model 10 was followed by the Model 10A powered by a Franklin 4AC-99 engine and the Model 10B with a Lycoming GO-145. Six Model 10As were evaluated by the United States Army as the YO-54, the successful testing led to an order for a slightly larger and heavier O-62, later designated the Stinson L-5 Sentinel. A number of Model 105s and Model 10As were impressed into Army service as the AT-19 (later L-9).After the Second World War the type was developed as the Stinson 108, the prototypes being converted Model 10As.

This page lists all films that feature the Stinson Voyager.